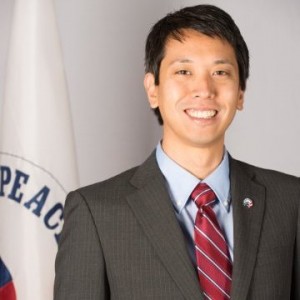 “Learning languages has been important to me since I was a child, and became something I grew to love because through the language I learn I feel that I learn about the culture and the people. I was born in Los Angeles, but grew up in idyllic Munich, Germany and remained there until I was 10 years old. During this time, I spoke Japanese at home, but German at school. I then moved back to a small rural island in western Japan, and remained there until I graduated high school . I came to the USA because I wanted to see the country in which I was born, and learn to speak English.  I went to Oklahoma and Florida for college. After graduating, I joined the Peace Corps and served in Nicaragua from 2007 to 2009, where I taught about the environment in the Spanish language. Interestingly, when I was in Nicaragua, I found a very cheap French language course, and started taking some classes. Taking French courses taught in Spanish was certainly interesting.
After Nicaragua, I came to Washington, DC for a job at Peace Corps Headquarters. I kept taking language classes because I love languages so much; I have taken Spanish, French, Russian and Arabic classes in DC.  I learned about GLN from a friend, and he was telling me how fun and affordable the classes are. I decided that I would give it a try and took the Russian Tourist class with Anna in Spring 2014. Her class was very interactive and fun. I especially liked that the class focused on practical conversational skills. This spring, I took the Mandarin Foreigner class with Doudou and the class lived up to my expectations- she was fantastic and I learned so much! As a language enthusiast, I have taken many classes with different organizations and I like the GLN classes the most. It is a good value and I find their methodology very effective. Most importantly, they make the classes fun!
I donated the deposit after the class because I really enjoyed the classes, and I agree with the GLN teaching methods and philosophy. When I learned that I won the grand prize I couldn’t believe it. This is the first time in my life that I’ve won a grand prize. I always wanted to visit the Dominican Republic as a fan of DR pop culture. I am excited to visit the beautiful Caribbean island and spend some time around white beaches and the emerald blue ocean while enjoying the sun. I am looking forward to speaking some Spanish too, because my Spanish is getting pretty rusty. I would like to thank GLN for the great courses they provide for affordable price and I’m looking forward o taking more classes in future. ”  –Shunpei Iguchi