When native English speakers think of traditional desserts, usually velvety ice cream, fruit pies, layered cakes, and decadent chocolate creations come to mind. However, in Japan, these are not the norm. One of the more popular desserts in Japan is どら焼き (Dorayaki). Also known as Mikasa in places like Osaka or Nara, Dorayaki is a sandwich-like pastry made by putting a sweet red bean paste in between two delicious honey pancakes.

The “official” Dorayaki was not made until the early 1900s, but there are records of people enjoying similar pastries since the Edo period (around the 1600s). The dessert plays a prominent role in the Manga/Anime Doraemon. The Manga was first published in 1969, and the main character – Doraemon – absolutely adores Dorayaki. In fact, the dessert is used several times throughout the series as a trap for Doraemon! Some Japanese dessert companies even release Doraemon themed-Dorayaki during the Spring and Fall.

Dorayaki made another pop-culture appearance in 2015 when the film “An” (“Sweet Bean”)  hit Japanese theatres. The movie was about a woman who claimed to have one of the best Dorayaki recipes…ever. Though sadly I don’t have access to her recipe, there’s still a great recipe by Japanese cook Nami that’s sure to make your day a great one! Her recipe allows you to turn eggs, sugar, honey, flour, and bean paste into a delicious dessert you won’t forget.

Though the classic Dorayaki is the most popular, it comes in all sorts of flavors. When people want to try something new, they will usually flavor the bean paste with matcha, hazelnut, or chocolate.

All-in-all, Dorayaki is a great new dessert to broaden your cultural horizons. Some of the other GLN interns and I went on an expedition to find some near us, and we found a fantastic place called Kanji Kana restaurant on Vermont Avenue. All 5 of us really enjoyed the Dorayaki we ate, and we highly recommend them to anyone who’s willing to try them! 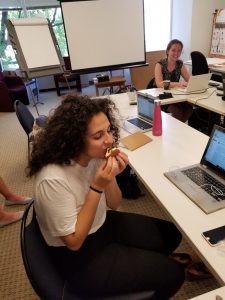