I have been interested in learning Chinese since I was about 16. I was lucky enough to 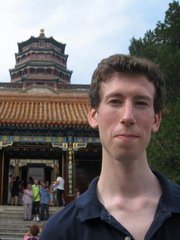 have a world affairs history teacher in high school who focused on the impact of the rise of China and the other East Asian economies for an entire quarter, and it piqued my curiosity. Two years later, as a senior, I took an East Asian history and culture class, and that got me into Chinese history and culture as well.

Like a lot of people, I started formally studying Chinese in college, but never had quite the time to devote to it that I wish I had. I have been studying it off and on in the 8 years since. My basic fluency improved a lot during the year I spent in Beijing right after college, but I like to take courses here and there to refresh what I know.

I have been involved in GLN as a student for about two and a half years, now. I heard about GLN from a friend at GW, and it sounded like a good way to keep working on my Chinese while in grad school. I really liked the classes, and at the suggestion of one of my classmates, who was a director himself, I applied to be the Director of Teacher Support. I have been in that position for about 8 months, and it’s been a fantastic experience. I’ve met some of my best friends through working for GLN.

My favorite word in a foreign language is naturally from Chinese. It’s “马马虎虎/mama huhu”, which literally translated, means “horse-horse tiger-tiger.” Somehow, this phrase means “so-so,” as in “my Chinese is so-so.” One explanation I’ve heard is that you are saying that something is neither a horse nor a tiger, it is somewhere in-between. It is apparently an intensely colloquial phrase, and while I was in Beijing, locals always found it quite odd to hear a laowai like myself using it.