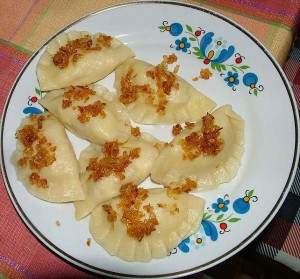 Anne Applebaum discusses the rediscovery of Poland’s national cuisine beginning in the early 1990s in this article for Foreign Policy.  Although during communism there existed expensive private restaurants that advertised unique menus, those offered by Poland’s more common state-run restaurants often lacked the flavor and diversity that reemerged in mainstream cuisine after the Cold War.  Addressing this variety in cuisine, Appelbaum writes:

“With political stability came national self-confidence, and with that came a revival of Polish cooking on a national scale.  Today, the most fashionable Warsaw and Krakow restaurants no longer serve bland foreign food with fancy names.  Instead, there are robust pork and duck dishes, red cabbage, and wild mushrooms.  They serve smalec, an old-fashioned peasant spread made of pork fat and eaten with rustic black bread.  Trout, venison, and wild boar, all historically part of Polish cuisine, have reappeared on menus too.”

Applebaum also discusses karczma, or roadside inns, which are among her family’s favorite locations for finding tasty meals.  Among the dishes that can be found at these inns are zurek, a soup made of sour bread stock, white sausage and vegetables; as well as a type of grilled pork filet served on a skewer.

If you are interested in learning more Polish cooking, Appelbaum published last year the cookbook From a Polish Country House Kitchen: 90 Recipes for the Ultimate Comfort Food.