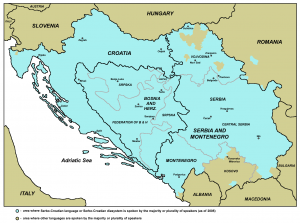 On occasion of Croatia’s new status as a European Union member state, Asya Pereltsvaig discusses the history of languages within the Balkan region in this article for GeoCurrents.  Focusing on the influence of dialects in shaping languages within the region, she also elaborates on how in most cases, ethnic and religious identity, rather than geographic boundaries, is the strongest factor in determining where a language is spoken.

Another topic discussed by Pereltsvaig is the two national standards of language that developed in Croatia and Serbia.  Although both standards were developed using similar methods, she highlights certain areas where they do not overlap.  She writes:

“The two national standards still differ in their pronunciations, vocabulary choices, and sentence structures.  For example, ‘the Croats followed a policy of purism in issues of vocabulary, while the Serbs were largely concerned with remaining true to the vernacular language (Greenberg, pg. 47).'”

Contrasting with examples of Serbian vocabulary, she goes on to provide examples in standard Croatian that rely on “native” Croatian words:

“Examples include the Slavic-derived zračna luka (literally ‘air harbor’) rather than aerodrome, munjovoz (literally ‘lightning vehicle’) instead of tramvaj ‘tram,’ osposoba instead of kvalifikacija ‘qualification,’ and so on.  Standard Croatian retained native names for calendar months, whereas standard Serbian uses the Gregorian januar, februar, mart, and so on. The Croats play nogomet (literally ‘foot-throwing’), while the Serbs play fudbal ‘soccer.'”

Pereltsvaig concludes by questioning whether or not the Balkan trend towards standardization will continue, making the various languages less mutually understandable for the region’s inhabitants.  As an alternative scenario, she suggests that Croatia’s European Union membership may reverse this trend.