Boo! In honor of Halloween, each week in the month of October we’d like to share a spooky story from around the world. Today’s story comes from Germany, home of our Leadership Fellow Jacki Schilles. No one quite knows when this story was first told, and aspects of the story change with every retelling (Sometimes it’s not very spooky at all), so you will have to forgive us if you know another version. This is the story as it was told to our office. Enjoy!

Long ago, the town of Hamelin was beset by the Plague. Of course, back then most towns lacked sewers and sanitation, and the practice of medicine was nearer to magic than to science, and plagues were not altogether uncommon. It had happened before, and it would happen again. Predictability, however, does little to assuage the misery and persistent anxiety of a plague. Something about our psyches makes it hard to believe that it could ever happen here or now, much less to ourselves or those we are closest to. So, like the rest of Germany, Hamelin lived and worked in denial. Farmers tended their fields, weavers tended their looms, merchants kept shop, and everyone went to church and said his prayers. News came that the Plague had infected other towns nearby, and before long the poorest of the poorest of the poor grew boils and died in delirium; still, for most of the townspeople, plague seemed remote. Not here. Not now. Not us.

Little by little, however, the signs became harder and harder to dispute, and the everyday lives of the townspeople took on a character of unnamable horror. Soon it became agony to tend the field or the loom or the shop as though nothing were wrong. Finally, unable to deny it any longer, the mayor had it proclaimed throughout the town, “Plague has beset Hamelin!”

In a twisted sort of way, this came as a relief to many of the townspeople. The hardest part for a person without Plague in a Plague town is pretending that things are normal when they are not–making small talk to avoid revealing their real, persistent unease; rationalizing the deaths of their previously healthy neighbors; raising their children as though they would live forever. Now, at least, the Plague had a name. It was an enemy to be fought. It was still a powerful enemy–perhaps too powerful to resist–but at least it was no longer some nebulous terror. At least it could be reckoned with. For the foreseeable future, the townspeople would seek practical ways to thwart the Plague. They would not endeavor at the impossible task of living normally.

The afternoon of the proclamation, the men and women of the town met in church to pray while their children remained at home or in town to play. There was serious business at hand, business not fit for children. While the men and women of town sat in worry, determination, and above all silence, the church organ thundered melancholy hymns. The town priest led a prayer and motioned for the mayor, who was also in attendance, to take the pulpit.

They mayor was a stout man of about middle age, dressed according to the latest fashion in relative opulence. He did not need the people to stay in power but he was a man who liked to be liked, and as he was also a capable man, he was popular and even loved about town. “Ladies and gentlemen,” he began, “as I have made known throughout the town, Plague has arrived in Hameln!” The mayor paused for effect, and though everyone now knew about the Plague, still a few frightened gasps filled the silence of the pews. “We do not yet know,” he continued, “whether this Plague is the will of God as punishment for the wickedness of our hearts or the work of the Enemy to turn us away from God’s love. One thing, however, is clear: the only way to save ourselves from this Plague is to turn to God and hold fast to his ways. For if the Plague is our punishment, our Piety will end the Plague; but on the other hand, if the Plague is the work of the Fiend, only God’s Grace can vanquish it! Think not of yourselves, but of your children, still pure before God, still deserving of salvation. Do not allow the Plague to punish our children for our sins. Let us earn the Grace of God!”

These remarks earned general praise throughout the church. The townspeople felt largely reassured and went home excited to save their children and obey God’s laws. Whether or not they really did obey God’s laws is hard to say. What can be said is that still a month later the Plague had only gotten worse. Once again, the men and women of the town met in church while their children played in the streets. Once again, the organ thundered. And once again, the priest said a prayer and motioned the mayor to the pulpit. Before the mayor could speak, however, a lanky man in a tacky pied outfit stood up in the back of the church and moved briskly down the pews. “Wait,” he cried, and the whole church turned to see him.

The mayor frowned. “Who is this stranger?”

“I am a Piper,” answered the stranger, “I come from far away, and I have a proposition for you.”

No one said anything as the Piper now stood before the whole congregation. He continued, “I have journeyed to many far away places, and among my favorites is Paris. The natural philosophers of that great city have made a critical discovery: Plague is not spread by God or the Devil. On the contrary, it is spread by rats! This awful, awful Plague is not punishment for your impiety. No, no, no, my friends, it is simply what nature does to a city infested with rats. If you want to save your city, all you need to is exterminate the rats!”

The townspeople felt some trepidation about this all too convenient explanation for the Plague, but after a whole month of death and loss, they were willing to explore new solutions. There certainly were a lot of rats in town.

“Suppose we believe you,” said the mayor, “what, exactly, do you suggest we do about it?”

“That’s the very reason I’m here!” cried the Piper. “My friends, I possess a unique gift: I know a song, which, when played correctly on my pipe, compels rats to follow me wherever I lead them. For the price of merely one hundred gold pieces, I will play my song and lead all the rats of Hamelin to the river to drown. Then your fair town will be free from this awful, awful Plague! Your children, as you say, will not be punished for your sins.”

A month of Plague, of course, does considerable harm to the coffers of a town, and no one really knew if Hamelin could raise that kind of money. Similarly, though, no one really expected the Piper’s plan to work. The general consensus was that there was no harm in trying. At least this is what the mayor surmised from a brief look over the congregation. The mayor agreed to the Piper’s terms upon completion of his task and asked him to rid the town of its rats the very next morning.

Thus, the following day, the Piper arrived just before dawn in the town square, dressed in the green of a hunter. Despite the time and darkness, flocks of the curious and incredulous surrounded the Piper to watch him perform his magic. The Piper drew his pipe and began to play. His song sounded ordinary enough. It was a light, happy song, totally at odds with the gravity of what he was doing. The Plague was serious, and ought to have been dispatched with the sad dignity of church songs–a thundering organ, perhaps. Sure enough, though, rats began to surround the Piper. At first only a few, but soon the street filled with rats and the curious and incredulous were forced to retreat. The Piper began his walk out of town toward the river, and the rats followed him in a trance. From afar, the townspeople watched the Piper play his pipe by the banks of the river, as all of the city’s rats walked to the bottom to drown. When the Piper stopped playing only one rat remained. The Piper smiled at the rat, left it where it was, and returned to town to be paid.

Hamelin was baffled. No one knew whether to rejoice or cower as the Piper made his way back to the town square to meet the mayor and collect his payment. “Now that I have rid Hamelin of rats,” he said as he approached the mayor, “ the Plague will finally stop. Maybe give it a week or two to really dry up.”

“You see,” said the mayor, “after a month of Plague, Hamelin does not have that kind of money. No one really expected your plan to work. We were never planning to pay you.”

The Piper’s face slowly morphed from good humor to surprise, and then to fury. “No one here can pay me?” He looked over the mayor in his rings and opulent clothes. “No one?”

“This is a grave insult, sir,” said the Piper, “and you will regret it when I have my revenge.” 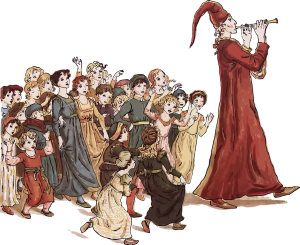 The Piper left town without another word. No one really thought more about him after that, though. The Plague cleared up, and people were much too happy–much too relieved–to worry about the strange Piper. Some months later, in the cool of Autumn, the townspeople felt it was time to give proper thanks to God. All the men and women of Hamelin met in church to pray while their children remained home or in town to play. This was serious business, not fit for children. The townspeople sat in gladness, relief, and above all silence, while the church organ thundered out melancholy hymns. They could not hear the light, happy song outside. They couldn’t hear it when their children stop playing. They could not hear the little footsteps caught in a trance as they wandered into the river.

0 Responses to "Spooky Stories from Around the World: Pt. 1, The Pied Piper"