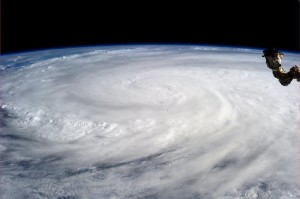 Last Friday, Typhoon Haiyan crashed through the Philippines, leaving incredible devastation in its wake. Authorities estimate a death toll of 10,000. The storm is known in the Philippines as Yolanda and is one of the fiercest typhoons ever recorded. (Here’s how you can help).

American astronaut Karen L. Nyberg shot the above photo of Haiyan from aboard the International Space Station.

So, what is the difference between a typhoon and a hurricane anyway? Location, according to the NOAA. They are both tropical cyclones, just found in different parts of the world. A typhoon occurs in the Northwest Pacific Ocean. A hurricane occurs in the North Atlantic Ocean, the Northeast Pacific Ocean east of the dateline, or the South Pacific Ocean. Tropical storms that hit in the southeastern Indian Ocean or the southwestern Pacific are simply referred to as cyclones.

The Northwest Pacific Ocean is the busiest spot for tropical cyclones, with 27 named storms on a given year. The Philippines have been especially vulnerable to typhoons as of late. La Nina weather patterns increase the intensity of the storms in the Philippines.